Hooray! This post, my last one of the year (I promise), is not another list but is rather more a small collection of things that happened in 2014 with one thought about them at the end.  This thought just might tie these things together. The ties, connection, or hypothesis might not be correct or appropriate. It’s more of  just a tentative thought at this point. Any comments are welcome. I’ll start now with four things I saw this year.

In March I had the opportunity to see David Graddol (who I wrote about here) give two very similar talks online. One was at IATEFL and one was at TESOL. His talks were also the focus of a #KELTchat. I liked the talks (which are linked to in that #KELTchat link above). Lots of numbers and charts and Powerpoint wizardry and things to think about. Yet the takeaway I got from all this actually had very little to do with Graddol or his talks. My lasting memory of this time in relation to Graddol is how I enjoyed a talk at the KOTESOL Seoul Chapter Conference in March much more than his talks.  Sandra Lee McKay, author of “Teaching English as an International Language” (admittedly also a big name) gave a talk that I connected to on a deeper level and got much more out of. I should say I didn’t agree with everything she said, there were some funny moments when myself and friends were furiously scribbling notes about disagreements, but I thought it was a fascinating talk and I was thrilled to see it.

In early April our good friend (and interviewee) Russ  Mayne delivered a stellar presentation at IATEFL. It seemed to be the talk of the town in the ELT blogosphere, to mix metaphors. Here is the reaction to the reaction from the man himself. From my personal viewpoint, one of the most interesting things about “Russelmania” was not that his talk was well-received (as it should have been). The interesting thing for me was how many people talked about it like it was something completely new. I think Russ has been saying similar things equally as eloquently and persuasively on his blog for more than 2 years now. I was genuinely surprised his talk seemed like such a surprise to so many.

Also in April (I guess it was a busy month) I went to a Nara JALT Chapter meeting. I saw a presentation by one Mr. Kevin Stein on students’ stories on their experiences with Extensive Reading. I enjoyed Kevin’s presentation immensely and I kept thinking to myself about what a great presentation it was and how lucky I was to be able to see it. I attended the ER World Symposium in 2013 and saw lots of great presentations there and I thought Kevin’s would have fit in very well and would have been one of the best ones there too.  I can say Kevin’s presentation was one of the best presentations I have ever seen without any criteria about topic or location. It was fun to be an international visitor for it. Anne Hendler and I received applause from the audience for making the long journey to see the presentation. I got the sense that some people were thinking “Who the heck is this Kevin guy? He drew such a big crowd, including people from abroad!” 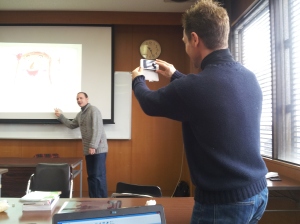 Kevchan is kind of a big deal.

Scott Thornbury came to KOTESOL this year. He delivered a plenary. It was excellent. No surprises there. One of the surprises was when he mentioned #KELTchat in his talk. If my memory is correct he mentioned it as an example of the positive and productive conversations about teaching that can go on and that might be needed and helpful for teachers’ professional development. While Alex Grevett was suppressing squeals, I was thinking about what this mention meant, if anything. Here was the man who wrote “An A-Z of ELT” (and so much more of course) mentioning a smallish group (mostly) on Twitter (but also on Facebook!) in a plenary at KOTESOL. I was surprised and I think others were as well. I pondered the implications and potential impact of this mention for a while.

Before my attempt at some analysis and trying to tie things together I’d like to ask you, dear reader, to take a moment to predict what I might say. What connections can you draw between these events? Do you think I am onto something?

Maybe I shouldn’t be surprised by all this. Maybe others already take it as a given that you can see a great and thought provoking presentation at smaller conferences in Northeast Asia or elsewhere. Similarly, maybe people already know that a JALT or KOTESOL chapter meeting or a #KELTchat (or iTDi courses) can be fertile ground for professional development and we don’t need to gravitate towards the bigger and flashier events. Perhaps it should be no surprise that Scott Thornbury mentioned #KELTchat in his talk. After all, he did participate in a Twitter chat with our friends at #AUSELT (links to summaries, yes plural, here). For me, this year was a nice reminder of the potential for smaller and maybe more under the radar events and groups. Maybe there is something happening here or maybe it is an illusion or wishful thinking. Only time will tell. Bring on 2015.