My boardwork could most charitably be described as crappy.*
There, I said it. I feel better already.

Some might even say that I revel in my craptastic boardwork.  What is wrong with me? How dare I think such a thing, let alone brazenly admit it and even brag about it here? What kind of nefarious reason do I have for taking pride in what is commonly seen as an extremely important part of the English teacher’s job? What kind of perverse pleasure do I extract from watching my students struggle and ultimately fail?

Actually, I don’t get any pleasure from watching such struggles because I don’t see them. I  don’t think my students really mind and I don’t see much in terms of boardwork related struggles. I think at first they are surprised at exactly how crappy my boardwork is but they get over it and they get down to business. I don’t think it handicaps my ability to teach or their ability to learn.

One amazing thing I have noticed this year is that many of my students take exquisite and extremely well-organized notes in their own personal notebooks. I am continually awed by how much they make their own sense of the cyclone of information splattered across the board.

Perhaps from my chaos comes their order? I can’t help but think that my atrocious board work might  be one of the first things to draw judgment and comments from an outside observer of my class. I wonder if they would have noticed the immaculate notes my students took in spite of the fecal material strewn about the board. Why would would their eyes be drawn to this? Because it is messy and it flies in the face of what they believe and what they have been trained on, I suppose.

If I am being honest and not too optimistic I would probably have to admit that sometimes I have to re-write a word or clarify that the strange letter I have written is actually supposed to be a ‘u’ even if it slightly resembles a ‘c’ and doesn’t have any semblance of a line or anything on the right of it. Now, obviously, requiring students to frequently ask for clarification about what the teacher has written on the board is not ideal, nor is it very efficient. Maybe I have made up for this inefficiency by being lightening fast on things like setting up pair and group work. Another, and probably more ridiculous theory is that my weak boardwork is endearing to students because it helps them see me as the real and idiosyncratic human that I am. Maybe if I were to unveil my perfectly planned and organized boardwork each class it would detract from the organic feeling I am currently enjoying in class. Or maybe I am just a lazy bastard who never learned or forgot how to write a lower-case ‘u’ properly. (I am a boss with a capital ‘U’ though.)

I am not necessarily encouraging teachers to try to be as messy and disorganized as possible on the board. I might encourage teachers to think a bit less about the board if it means they will think more about things like, I don’t know…, students and learning. This not to suggest that the boardwork professionals and believers don’t think about these things. I guess I am just wondering aloud if boardwork is really as important as some folks seem to think it is. I am also wondering where these beliefs come from and how tied to reality they are. I don’t think I am advocating a massive research study  on the relative impacts of orderly and disorderly boardwork.

Thanks very much for reading and sorry if I have disappointed you or shaken your world view.
As for being crappy at board work…Sorry not sorry. 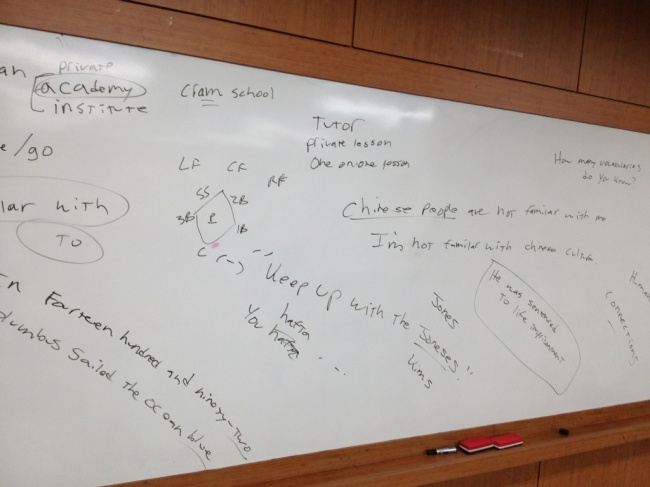 *(Stronger wording might be in order depending on the day, criteria or one’s choices in descriptive language.)