[This blog post will be a bit of a departure from my usual ranting and wondering about English teaching. Don’t worry #TESOLgeeks, there will hopefully be something for you as well. I wrote a much longer piece yesterday and somehow managed to lose it but I feel compelled to share this now before war comes and it is too late. Sorry. I joke, I joke.] 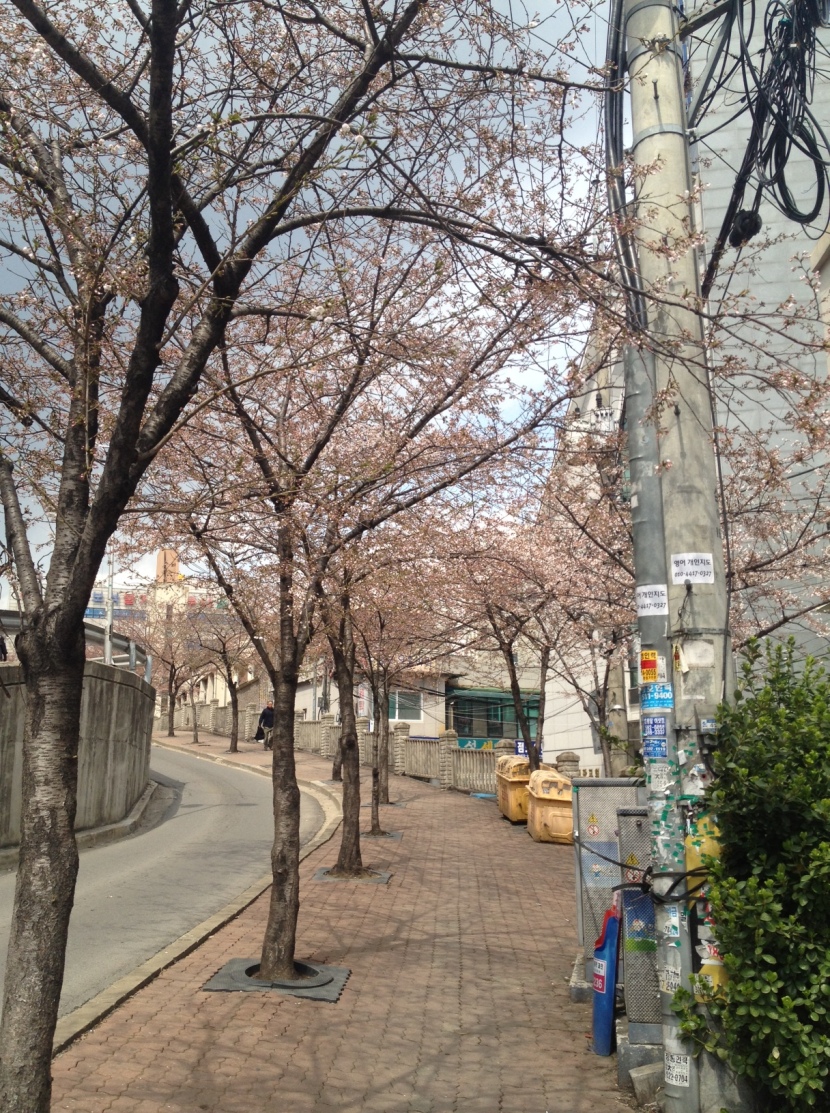 I am worried….worried these darn cherry blossoms are going to come and go when I am not paying attention.

Hi. First of all I’d like to offer a sincere thank you to those of you around the world that have recently asked how things are going in South Korea. I really appreciate. I do. It is sweet. It is nice to be cared about and I appreciate your care and concern.

I offer no such thank you or warm fuzzy feelings to the Western media. These bloodthirsty bastards seem to be intentionally blowing things out of proportion. For what? Ratings? At best. I have to chuckle when I read the desperate and frustrated reports from US media outlets who can’t seem to find enough quotes from South Koreans freaking out about the situation.

My theory has long been that I am much more likely to find a North American in a frenzy about the situation than a South Korean. In fact, I would say I am much more likely to have any sort of conversation about North Korea with a North American than a South Korean. Realizing I am painting with very broad strokes I would say that the typical North American eager to talk about North Korea is not really aware of the situation or the conditions on the ground here in South Korea but is more than ready to opine on the threat levels.  Ignoring for now the dangers of gun violence in the states, I will honestly state for the record that I am much, much more scared about traffic accidents in South Korea than I am about anything involving North Korea. I have been thinking for a long time that South Koreans don’t really pay the DPRK much attention because they have become accustomed to the threats and bluster.

I thought this week it might be interesting and good English practice to discuss North Korea related issues with my classes. Actually, one group decided that this is a topic they would like to talk about. The first group I talked discussed this with is a group of graduate students in International Studies. Although I was not worried at all about the situation before class their comments were more than re-assuring.

One guy mentioned he is not worried at all because experts like Professor Cho (his prof. for Global Politics in the grad school) is not worried. Another student said that there is no way that China would allow North Korea to actually do anything.  A third student said all the threats and such are just focused on the domestic audience in North Korea and are a chance for KJU to flex his muscles. Another student said this is nothing new and she is very familiar with this song. She asserted that the whole thing is a show from North Korea to get more aid from other countries. The group consensus was that it would be suicide for North Korea to actually start a war. They were certain South Korea and the US would destroy North Korea easily and quickly and that war would be end of the “Kim Dynasty” in North Korea. They told me there was nothing to worry about and someone said that if there is a threat the US embassy would be quick to take care of American people and since the US embassy hadn’t made any warnings this is a sign that all is well. An answer that I appreciated but does not really fit into the theme of this post was something like, “If there is nuclear war it is better to just die quickly.” Again, the overall feeling was something of threat fatigue and boredom.

The following day I collected some more thoughts from a different group of students. I offer them here for your listening pleasure. The students (future translators/interpreters) are sharing their thoughts on why my mother shouldn’t worry about the tensions on the Korean peninsula and the answers are directed towards her.

Here are their messages:

(As you can see we had a bit of fun with it. Bonus points if you can guess which expressions were new on the day)

While the classes are quite obviously different in terms of students and goals and everything I followed a relatively similar pattern in both classes. I started with general questions like, “What is going on with North Korea?” and “What do you think about it?” and students talked to each other before sharing with the whole group. The next stage involved me pretending to know nothing about the situation. Students had about 5 minutes to prepare in pairs what they would say to someone who knows nothing about the situation. It was quite fun to pretend not to know and to ask, “You are from South Korea?  Is that the good one?” and things like that. It was nice to put students in the expert role and my feedback at this time was just asking questions if I thought an American with limited knowledge of the situation might not follow their points. I saved the more English-related feedback for later. After students told me all about the situation and answered barrage of questions and ironed out my fake confusions it sort of naturally spilled into a real conversation about our real opinions and thoughts on the issue. For the final step I asked for students’ help. I told them about my theory how people in the ROK don’t really talk or worry too much about things in relation to the North as compared to North Americans. This seemed like new and interesting information for some students. I then mentioned that lots of people back home are worried and wondered if my Ss would be willing to share some thoughts with my friends and family back home. Especially my mom. They took a few minutes and prepared their thoughts and shared. I shared the audio files from the second group and summarized the first group because the audio files from the second group were much easier to work with. I used Audacity the second time and my cell phone the first time. I wasn’t really sure if I was actually going to share what the students said but they seemed keen on it. I felt bad for fibbing a bit and creating a situation where they had to speak but not actually sharing it. So, mom, please listen and if anyone else has any comments I will pass them along to my students.

Andrei Lankov, an expert on North Korea offers his reasons for calm in a TV interview. He also shares reasons to stay calm in a New York Times editorial.

For me the most interesting one was this piece from a South Korea college student on what the threats seem like to him.

Jeff Lebow writes about why he is not concerned about the North. (Nice Dr. Evil reference as well as a running tally of deaths from things that go bang comparison between the US and South Korea)
“War with North Korea Ermagerd” by Roboseyo.

Finally, I have a motley collection of links here and some of them are related to the Korean peninsula.

Thanks to @josetteLB for nudging me to blog about this.
Thanks to @annloseva for giving me the final push to blog about it (after I lost the post from yesterday).
Thanks to @ESLbarry for supplying many of the links listed above.
Thanks again to PLN members for their care and concern.
Thanks to @mymommy for always caring so much.
Thanks to you for reading.