Lately I have been doing a lot of work with Korean public school teachers who will be observers and mentors in their schools. I have been wanting to share my experience as an observee for quite some time. This week I finally got the nudge and inspiration that I was waiting for in Tony Gurr’s ongoing series of “Misfires with classroom observation” (1, 2, 3, 4, 5, 6,).  Please be sure to check them out as they are incredibly insightful and hopefully related in many ways to what I am sharing here.

Before I start I will share a little bit about the context of my story, which occurred at a language school attached to a university in Seoul. The language school had an intensive English program (among other programs) where students studied for 30 hours a week with a variety of teachers and had classes like reading, writing, listening, and grammar. Students at lower levels also had two speaking classes. One was called “Practical English” and the other was called “Learning to Speak.” The former was supposed to be more focused on accuracy and speaking in situations while the latter was focused on fluency and was considered a precursor to discussion classes. 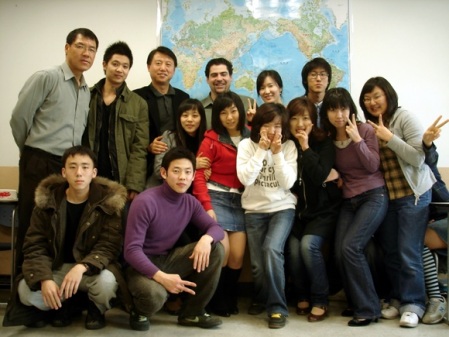 The observee from hell with his students.

Observations were generally a nebulous mix of development and evaluation. This means that suggestions and critical feedback (along with the occasional positive point) were given with an eye to improving teaching and overall customer satisfaction but the observations were also a chance for the Director to think about potential re-hirings.

Also, teachers didn’t know when they would be observed. The director didn’t want teachers to prepare too much for the lesson and it seemed that she wanted to “catch” people teaching in their normal way. Of course, there was no pre-lesson conference or any discussion except, “I will be observing your next class in 15 minutes if that is OK.” There had to be a very good reason for it not to be OK and teachers almost always accepted this.

Does this sound like a recipe for success in observation and feedback? Read on…

Mike as the observee from hell

I loved this particular group of students. It sure felt like the feelings were returned. I think the students genuinely enjoyed the classes and their time with me and each other. I collected feedback frequently and it was extremely positive. The end of term evaluations were also very positive.

I was teaching “Learning to Speak.” Again, it was my first term at the school. The students surely seemed to be LEARNing a lot (though I surely can’t take too much credit for it as they were in class for 30 hours a week). I was happy and proud of the progress that they were making and the work that I was doing. Since I was told that the focus of these classes was on having students speak as much as possible that is exactly what I did. I tried to create situations for the students to talk as much as they could and was there to help when needed. I gave feedback and tried to provide some language during conversations, after conversations and after class on a blog I created for the class.

I was very pleased with how the class was going and when the Director asked (told?) me that she would be observing me I felt confident. I thought that the previous class session  had gone well and I had a pretty good idea of what I wanted to do in the class that was going to be observed. Since it is coming up on 5 years ago I won’t share too many details of the class here. I found the blog post that I wrote after this class as well as one from the class before it. I mostly just remember that the students talked a lot and that the topic was about traveling and planning a trip. I also remember being quite pleased with the class and thinking that it was a nice representation of the types of lessons that I was doing in “Learning to Speak.”

The Director seemed to be mostly pleased with the lesson (and I guessed that I wouldn’t be let go after just one term), though I cannot really remember any specific feedback on this. I think she might have said that it was good that students talked so much. Great. This was a bit of validation and relief. Then the negative and not so helpful comments came:

You talked too much at the beginning when giving instructions.

You didn’t talk enough throughout the lesson.

Students didn’t speak out in front of the whole class.

You didn’t pre-teach any vocab.

You didn’t write anything on the board.

You didn’t use the textbook.

Do you notice any patterns here? Now, 5 years later, two things jump out at me. All the commentsinclude something that I didn’t do and this gives me the impression that they were things that I *should have done. The other thing that jumps out at me is that there are words like “enough,”  and “too”which clearly show some judgments about the right way to teach not being met.

These comments about a lesson that I was very pleased with struck me quite deeply and emotionally.

I tried to prove my point.

I explained how well my students were doing.

I explained how well I thought I was doing.

I shared some of the tenets of dogme.

I shared some theories about speaking that I had heard around the staffroom or on my CELTA course.

I told her that I had a blog for errors.

I told her that there was plenty of words on the board yesterday, reminding her that she wasn’t there yesterday or the day before.

I made sure to say that I was the world’s leading expert on my class and that she really didn’t know about my class or my students or what I was trying to do.

I spent a lot of the post-conference time explaining my decisions not to do the things that she mentioned.

What didn’t I do?

I certainly didn’t reflect. I didn’t really listen to anything she said, though I surely heard the words and responded. I didn’t consider that her perspective could offer me anything of value. I didn’t doubt for a moment that what I did was right. I didn’t imagine that I was doing anything but great things for and with my students. I didn’t make any reasoned changes to my teaching practice. So, I think I was a pretty horrible observee.

I don’t want to make excuses or explanations for myself or my actions as an observee at that time. I will leave that to readers if they wish. Again, I think Tony’s blog posts offer a lot of insight into how this sort of unproductive observation session might have happened.

I would love to hear any similar stories. Thanks for reading!

Next time I will share the time I was an observer from hell.